Mission of Argentina to the UN

Issues in which the Permanent Mission works

Permanent Mission to the Un

Ambassador Martin Garcia Moritán presented his letter to credentials to the Secretary General of the United Nations, Ban Ki-moon 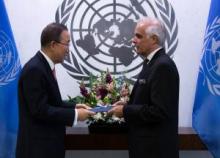 The Secretary General of the United Nations, Ban Ki-moon received the credentials of Ambassador Martin Garcia Moritán as Permanent Representative of Argentina to the United Nations. The ceremony took place at the headquarters of the organization in New York on February 16, 2016. Ambassador García Moritán expressed its willingness to strengthen the links between Argentina and the United Nations and to continue supporting multilateralism in the framework of full respect for the purposes and principles of the United Nations Charter, in accordance with the instructions given by President Mauricio Macri and Foreign Minister Susana Malcorra.

At the Ministry of Foreign Affairs and Worship, he served as Director of the Special Representation on Terrorism Affairs (2011), and Director of Federal and Electoral Affairs (2012-2013).