Mission of Argentina to the UN

Issues in which the Permanent Mission works

Permanent Mission to the Un

Signature of the of the United Nations Charter , San Francisco June 26, 1945 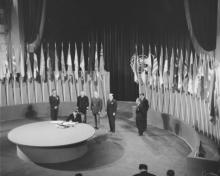 The Argentine Republic is a founding member of the United Nations and has since played an active role in the defense and promotion of International Peace and Security, Human Rights and Sustainable Development.

The Charter was signed on June 26, 1945 by the representatives of the 50 countries. The United Nations officially came into existence on October 24, 1945 when the Charter had been ratified by a majority of signatory states.

United Nations Day is celebrated every year on that date.

More information on the history of the United Nations can be found at the following link:
http://www.un.org/en/sections/history/history-united-nations/index.html